Being a pro writer and author and all that, I have given dozens (literally) of traditional editors self-induced alopaecia after reading my book manuscripts. Why? Because I don’t stick to punctuation rules. 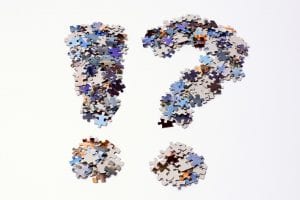 Punctuation rules: should they be relaxed? Now there’s a puzzle

Being a North American, too, I use punctuation that spans the Atlantic giving the grammar police on both shores the desire to stab me with a red pencil.

And you know what? I don’t care.

Don’t forget that I am a former copywriter, and copywriters are notorious for flipping the bird at conventional grammar, punctuation and even syntax sometimes in order to create an effect.

Ridiculously bad punctuation: not what we’re talking about

Now, by that I mean examples of vomit-inducing content, e.g.

These and their verbal siblings belong to the stack-’em-high-sell-’em-cheap variety of promotional writing and have been laughable since the 19th century or earlier.

However there is a big difference between that degree of punctuational ignorance and, well, relaxing the rules a bit to bring punctuation into line with modern conversational writing.

In modern day writing of blogs, articles, webtext and even books, anyone with half a brain will know they must avoid punctuation so bad that it makes you look stupid. For example: 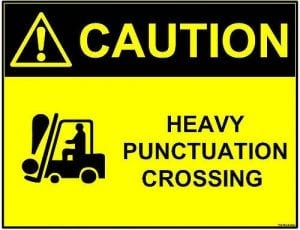 Getting its and it’s wrong
Its is like his, hers, theirs. Its home, its future, its book. It NEVER is a shortened version of it is.
It’s is an abbreviation of it is, or sometimes it has. It NEVER means something that belongs to it. And yes, I know. English is not a logical language.

Getting apostrophes wrong
To add an apostrophe to a word followed by an “s” makes the new word state that it belongs to someone/something. E.g.: Suze’s book
To make a noun plural, however, you do NOT use an apostrophe – just, usually, an S … unlike this (with a spelling mistake thrown in for good measure!) which should read hard hats required beyond this point. 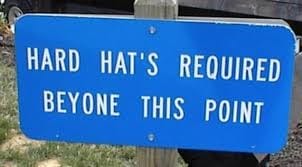 And there are many more: if you want some further examples, tips, plus a few laughs along the way, check this out…

Punctuation is a tool, not a ball and chain

Once you get the hang of big time punctuation rules and know how to avoid the major goofs, there is nothing that says you can’t use it as a dramatic tool to enhance what you’re writing.

My favourite flouting of grammar rules is to use ellipses … (there, see?) three dots which, correctly speaking, indicate an omission in the text. In the copywriting community this is often compounded by crossing it with the concept of dot leaders, so you get more than three dots to build up the suspense …………

Another favourite is the use of exclamation marks – not standing them up in a row like a picket fence, but using them a little more loosely than posh editors would allow (which is only one at a time, and only when the preceding words represent an exclamation, surprise, surprise. OK, I wouldn’t pepper them throughout a serious business blog, but in something where the mood is light and frothy, the odd double !!  isn’t going to make you, or me, look like a grammar gremlin.

But today we have a marvellous invention to do all the work for us writers: emojis!

Wherever we go on this wonderful internet we have the chance to express our emotions and thoughts through these cute little images of anything from a loving heart to some dog poop. I can’t wait to see who will be the first author to write a complete book using emojis only: no words. Now there’s a challenge…!! (ellipsis AND double exclamation mark: insult to injury?)

And for the purist grammar fascists, what next?

I can’t criticise these devout grammarians because as a writer and sometimes editor, I do stick up for the rules. However what I don’t agree with is sticking to some rules when actually they don’t make the slightest difference to the sense of the text. Then we’re talking perfectionism which is fine, but because many of the rules go back decades and even centuries, they have a nasty habit of inhibiting the evolution of the language.

If the language didn’t evolve we would still be carving out images of sabre-toothed tigers on cave walls. So a compromise is needed: evolution, not revolution, as someone a lot smarter than me once said.

What do you think? Should we relax our thinking about punctuation and other writing issues?

Or should we stick to the traditional? Discuss…!!

This article first appeared on the award-winning website, How To Write Better with Suzan St Maur

Canadian author, blogger and marketer Suzan St Maur lives in the UK for about 10 months of the year and the rest of the time in Ontario. Born in Kingston but with relatives and friends from Ottawa to Collingwood, down to London and across through Toronto, she spends a lot of hours driving on the 400s! She has had 35 books published (mainly nonfiction) so far with four more coming up and now works mainly as an author coach, helping new authors write their books and make their literary dreams come true. As a former copywriter and content marketing advisor she also speaks on marketing communications of all types and gives some lively workshops on blogging, personal branding and her rather ferocious “So What?” test! Catch her on her award-winning website, https://howtowritebetter.net/